I’m incredibly patriotic.  To quote the first line of one of my favorite movies: I believe in America.  I am conscious of this, which hopefully helps me to minimize the impact my experience as an American has had in distorting my understanding of the universal principles of my faith.

I believe religious freedom is one of the cornerstones of the common good.  I have been covering religious persecution since my days as a columnist for Asia Chronicle, with a particular interest in the persecution of the Baha’i in Iran.  I view regimes that persecute members of minority religions as pathetic tyrannies that lack legitimacy and belong in the dustbin of history.

Nevertheless some of the imagery used to promote the Fortnight for Freedom: Part Deux has left me feeling somewhat uncomfortable.

When I walk across my campus at Catholic University, I am lucky enough to walk under the shadow of the towering Basilica of the National Shrine of the Immaculate Conception.  And every time I see it, it inspires awe in me.

And this is what it looks like right now: 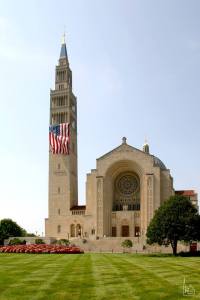 The symbolism of this structure—which seems to show how religious devotion can inspire human creativity and greatness—seems diminished (not entirely, but not unnoticeably) when it is stripped of its exclusively Catholic (and catholic) nature.

Others seem to be pushing a bit further, including the Diocese of Brooklyn, which distributed this:

But I wonder if I am the only one who winces at this mixing of religious and patriotic (or nationalist?) imagery.  I realize the US is not Serbia in the 1990s, where religion fused with nationalism to generate genocidal fervor, but I would still rather not see Mary or Jesus wearing the American flag or holding a bald eagle.  Some might see this as potentially dangerous.  Others seem to worry it borders on national idolatry.  My initial reaction was that it was absurd and silly.  Decking Mary or Jesus out in American flag gear is perilously close to Ricky Bobby territory.

Is it really necessary to use this imagery to promote religious freedom?  Is it working?  Is it even appropriate?  I’ll leave that for the reader to decide.  Personally, I’m skeptical that this will lead to greater religious liberty.