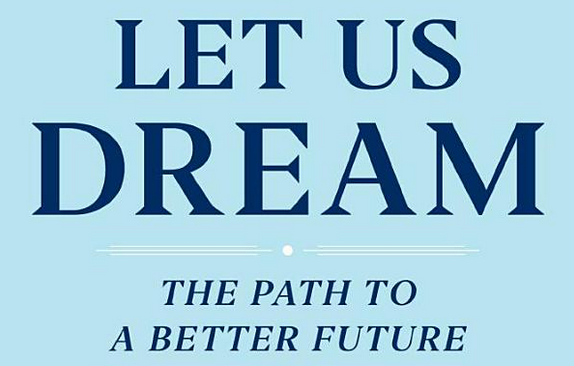 Here are some key quotes from Pope Francis’ Let Us Dream: The Path to a Better Future:

Our core problem is a dogmatic antigovernment attitude…that arose in the 1970s and ’80s. This makes it impossible for us to have a constructive debate about what government is for, what tasks it should take on and what good it actually does.

In truth, the whole antigovernment thing is fundamentally fraudulent. So is the conservative claim to believe passionately in states’ rights and local authority.

In practice, conservatives regularly vote for lots of government — so long as it serves the interests they represent. Start with farm subsidies, massive defense spending, regulations that disempower unions and measures that sharply tilt the tax code in favor of corporate interests and the wealthy.

As for the power of states and localities, conservatives regularly propose federal action to override state governments that issue safety and environmental regulations that business regards as too robust. Somehow, they think we need national “consistency” on these matters but not on, say, voting rights. And right-wing state legislatures regularly preempt laws passed by more liberal local governments…

The shutdown reminds us that government is not the problem but the solution, or at least part of it, when it comes to many aspects of our common life.

We can see the damage done to the air transportation system, bureaus that gather useful economic statistics, the Internal Revenue Service, the FBI, the Drug Enforcement Administration, and the Bureau of Alcohol, Tobacco, Firearms and Explosives. Add in the Coast Guard, Customs and Border Protection, the Forest Service and the Weather Service. And this is a very partial list…

Dick Armey, the Republican House majority leader during the Clinton-era shutdown, was as candid as anyone in revealing the hidden radicalism that serves as a straitjacket on our politics.

“Beneath our New Deals and New Frontiers and Great Societies,” Armey wrote in a book published in 1995, “you will find, with only a difference in power and nerve, the same sort of person who gave the world its Five Year Plans and Great Leaps Forward — the Soviet and Chinese counterparts.”

Sorry, but no. FDR, JFK and LBJ were not Stalin or Mao, nowhere close. Only by examining the anti-government view in its unabashed form can we understand why our two parties can’t be seen as equivalent and why rational negotiations are so difficult.

We know that the thirst for power at any price leads to abuses and injustice. Politics is an essential means of building human community and institutions, but when political life is not seen as a form of service to society as a whole, it can become a means of oppression, marginalization and even destruction….

If exercised with basic respect for the life, freedom and dignity of persons, political life can indeed become an outstanding form of charity….

Sadly, together with its virtues, politics also has its share of vices, whether due to personal incompetence or to flaws in the system and its institutions. Clearly, these vices detract from the credibility of political life overall, as well as the authority, decisions and actions of those engaged in it. These vices, which undermine the ideal of an authentic democracy, bring disgrace to public life and threaten social harmony. We think of corruption in its varied forms: the misappropriation of public resources, the exploitation of individuals, the denial of rights, the flouting of community rules, dishonest gain, the justification of power by force or the arbitrary appeal to raison d’état and the refusal to relinquish power. To which we can add xenophobia, racism, lack of concern for the natural environment, the plundering of natural resources for the sake of quick profit and contempt for those forced into exile….

Political addresses that tend to blame every evil on migrants and to deprive the poor of hope are unacceptable. Rather, there is a need to reaffirm that peace is based on respect for each person, whatever his or her background, on respect for the law and the common good, on respect for the environment entrusted to our care and for the richness of the moral tradition inherited from past generations.

On March 15, Millennial co-sponsored an event with the Initiative on Catholic Social Thought and Public Life at Georgetown University on the Catholic commitment to global solidarity at a time of rising ‘America First’ nationalism. The event was moderated by Initiative director John Carr and featured Millennial writer and Washington Post editor Elizabeth Bruenig; Shaun Casey, a senior fellow at Georgetown’s Berkley Center, who previously served as US special representative for religion and global affairs and director of the US Department of State’s Office of Religion and Global Affairs; and Robert Costa, national political reporter for the Washington Post and a political analyst for NBC and MSNBC.

Here are some highlights of the panelists’ remarks:

You can watch video of the event here:

Now that Donald Trump is the presumptive Republican nominee for President and Hillary Clinton has math firmly on her side to win the Democratic nomination, the next six months of politics is going to be contentious if not outright ugly.  Not just because we’re heading into an election that no one wants, but quite simply because Trump and Clinton are the two leading candidates Americans describe as potentially “terrible” presidents: 44% of Americans think Trump would be terrible (as opposed to 10% who’d argue he’d be “great”) while 30% in the US say Clinton would be terrible (compared with 11% contending she’d be “great”).  By the evening of November 8th (or in the early hours of November 9th), a large portion of our country will be disgusted with the election results.

To be sure, ideological differences are to be expected between rival political parties.  But as illustrated by these striking images, a divided Congress can bring politics to a standstill.  And I don’t just mean the Republican stonewalling of President Obama’s nominee for the Supreme Court, Merrick Garland.  As Trent Lott and Tom Daschle have argued, the lack of compromise, chemistry, leadership, and shared vision can bring our political system to a crisis point.  The anger of the American populace has been palpable in this election cycle and certainly some of the appeal to candidates like Trump is the old “throw the bums out” angst.  As philosopher Martha Nussbaum has observed, underneath this anger lurks fear and helplessness, and if this continues to go unaddressed, there’s potential to unleash a “dangerous rage in a way that might do great damage to the American people in the long run.”

So what is to be done?  If so many Americans consider our political system to be so dysfunctional and find the presidential nominees so repugnant, what is the way forward? END_OF_DOCUMENT_TOKEN_TO_BE_REPLACED

I know mine: gratitude. END_OF_DOCUMENT_TOKEN_TO_BE_REPLACED

Millennial writer John McCarthy has a new article at NCR. He writes:

His past leadership should give us a clear picture of what we can expect from a Speaker Ryan: doubling down on the failed notion that supporting the rich will allow everyone else to prosper. This has not only been disproven countless times—but is at stark odds with who we are as a people of faith….

Our history is shared with that of the immigrant, the union worker, and the middle class family. The notion that our nation was built by “rugged individualists” is false—we are built on communities who looked out for each other.

I believe this is what Americans so deeply crave: a return to strong, caring communities. We share a vision for policies that bring people together, rather than pit them against each other. Unfortunately, no one could be further from that vision than Speaker Paul Ryan.

The full article can be read here.