Yesterday we featured Millennial editor Robert Christian’s review of The Vision of Catholic Social Thought: The Virtue of Solidarity and the Praxis of Human Rights by Meghan Clark. The review can be read here. Christian also had the opportunity to interview Clark on her new book:

Robert Christian (RC): In the simplest terms, what does it mean to say human persons are created in the image of the Trinity?

RC: You talk about it a bit in the book, but how can we draw a distinction between solidarity and justice and explain the relationship between the two? If love (caritas) shapes our understanding of justice, but also calls us to go beyond it, is solidarity part of that ‘beyond justice’ that is rooted in caritas? Is it the desire for communion (that is rooted in love) that takes us beyond justice?

MC: The relationship between justice and solidarity is mentioned briefly in the book, but is something I will likely develop further in the future. You can meet the requirements of justice without having solidarity. You cannot however have solidarity without meeting the demands of justice. Justice focuses on what is required, what is due to you as equally and fully human (individually and structurally). Solidarity, on the other hand, pushes us to the next step of recognizing that we are human together and that, as I say in the book, my humanity is bound up in yours. There is a mutual vulnerability required by solidarity that is not technically required by justice. In reality, all lived solidarity is going to be intimately linked to working for social justice.

Before you tell me I’m still being too abstract, let’s think about campaigns for worker justice. On the level of justice, it is a violation of the dignity of workers for them to be subjected to unsafe working conditions, wage theft, fear, insecurity, and violence. It is a violation of their basic human rights. But if in working to protect their human rights, we move past distinctions of “us” and “them,” past only seeing ourselves implicated in possible guilt and complicity and start realizing that our own human dignity is under attack when yours is being violated, then we are talking about solidarity. Solidarity means we participate in the humanity of each other. This is why working for human rights, working for social justice starts to make solidarity possible but alone it isn’t enough. This link to justice also helps us pull back from a lot of talk and images of solidarity as warm and fuzzy but not costing anything. There is no solidarity unless I recognize that I have skin in the game and that my humanity is on the line too.

Caritas is a little more complicated and now you have me thinking about what maybe I should write next. I’ve written elsewhere giving a detailed argument for how and why we cannot have caritas as love of God without love of neighbor. For St. Thomas Aquinas, caritas is the virtue where love of God seeks to become union with God and he even uses the language of friendship with God. I can’t be friends with God if I am not friends with my neighbor. On the most basic level, I can’t be friends with my neighbor, love my neighbor if I am not just towards them –and this justice is social as well as individual. I’ve argued that today we need to push beyond where Aquinas ended to include a robust understanding of the preferential option for the poor as absolutely necessary within our understanding of the virtue of caritas. In the 21st century, love of neighbor must be grounded in the preferential option for the poor and marginalized. What I hadn’t really thought of in this way before – but am now, thanks to your question – is that I think solidarity is what the “love of neighbor” part of caritas is aiming at.

RC: In talking about mutuality and participation, you seem to caution against impersonal charitable giving and efforts to eliminate injustice, but isn’t this sometimes inevitable and maybe even acceptable for promoting justice? If a group of people take a trip to another nation and help build a house and experience real solidarity with a community, how do we weigh that against using the money that would be spent on plane tickets, etc. on building five or ten houses instead? Is there a place for both of these types of actions? When it is governments that are acting either at home or abroad (particularly to alleviate widespread injustice), while again I think you demonstrate the value of participation and benefits of solidarity, isn’t some level of action which does not fully meet the standard of solidarity going to exist, given the nature of bureaucracies?

MC: It isn’t all or nothing. My caution is against thinking the impersonal charitable giving and efforts to eliminate injustice are enough. One of the things you see a lot now, especially when a crisis or disaster first happens is: Text HAITI to XXXX and donate $5 to relief efforts. Sign this petition for the ONE Campaign. Both of these actions are good and useful, but they need to be gateway actions. These small impersonal ways, particularly through technology, make these small acts really quick and easy but are only effective for cultivating justice or solidarity if they spark us into taking more action. Do they inspire us to go to a Save Darfur rally? Do they help push us to learn more about what is going on in Syria? Do they push us to HEAR and listen to the voices of the people on the margins of a particular situation? One assignment I’ve given students is to use and investigate Twitter during a particular crisis – can they identify and verify the voices from the margins on social media? Can Twitter be a gateway to accompaniment and, by extension, solidarity?

The (RED) Campaign is a good example and a controversial one. As a gateway, this helps us to start thinking about our consumption habits in a broader context. If you get someone to start thinking: I’m choosing between 2 models of the same item, do I buy the (Red) one or the trendy color that doesn’t give any money to charity? If I stop, start thinking about how I’m spending money, where is it going, and the broader context, this is a gateway into a much deeper set of questions and the first step towards practices that can, eventually , cultivate solidarity. But if I think: hey I bought the (RED) phone so I’ve done my part to help fight Aids and my iPhone is “washed clean” of any questions of conflict minerals and labor conditions, then we have a very big problem. This is what I’m afraid of if we don’t raise caution about impersonal actions. There is no quick and easy solidarity, and really, there is no quick and easy justice.

RC: Should serious Catholics defend and promote the public positions they favor using the language of solidarity more than appealing to the enlightened self-interest of others? There are certainly pragmatic reasons in a pluralistic society to frame them in the latter way, but does that undermine efforts to build solidarity?

MC: I think we need to curb the appeal to enlightened self interest as the default position. I think what we are seeing now is a lot of evidence that when it comes to structural injustice, enlightened self-interest doesn’t motivate action and change. In the US, we are currently in a major crisis of communal identity, of the common good, and I think using the language of solidarity and the common good is desperately needed if we hope to find a way forward together.

RC: You quote Martin Luther King Jr. in the book. Do you think it’s the personalism in his thought that is the reason why so many of his key insights seem to parallel Catholic Social Teaching?

MC: I think it’s the Gospel. When King talks about the triple threat of militarism, economic injustice, and racism, he is offering a consistent vision very similar to CST, and in particular, what Pope Francis is doing when he points to all the aspects of a throwaway culture. It’s not just personalism, it’s the good news.

RC: You discuss how essential participation is, not just at the interpersonal or global level, but also at the international/interstate level. But what does this look like with corrupt regimes? What does it look like with other regimes that violate human dignity? Should development assistance always allow such governments to shape the nature of the assistance? Is it possible that there may be times where international and global solidarity clash?

MC: Here is where subsidiarity is so important; solidarity requires the participation of those on the ground, it doesn’t require the participation of the government. In normal cases, especially within democratic developing countries, this will be with the formal participation of the federal and local governments in the country. However, under corrupt regimes, that participation should not be located in the governments. One example of possible partnerships is working through churches or other community organizations. The challenge and requirement here is that the aid is driven by the concrete needs and agency of the people it is supposed to help. If we do not ask, “What do you need?” we are almost guaranteed to get the answer wrong.

RC: When I look at the chart on page 120 (see below), as a political scientist, I feel the urge to fill in the space where solidarity is located with terms that perhaps best reflect a solidarity-based approach. I might write: 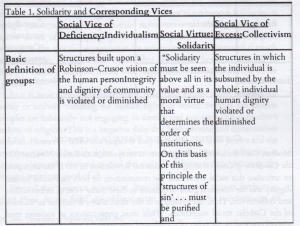 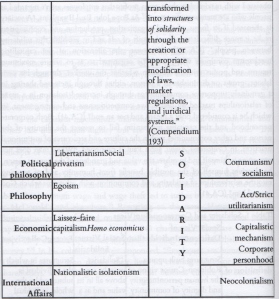 Can a case be made for outlining how Catholic Social Teaching leads to the adoption of certain philosophies or political approaches that can be defined using this type of secular terminology or is it so transcendent that only ‘solidarity’ or ‘Catholic’ can be included in a chart like this?

MC: On the one hand , the examples you mention would be ones that move us closer to a solidarity-based understanding of politics, economics, etc. The common thread is the necessary duality of both individual human dignity and the common good. One cannot be sacrificed for the other and, in fact, if you try, you will lose both. But I also want to push back and say CST isn’t providing an “alternative political theory.” If you notice the vices I listed under each, they aren’t individual incarnations but ideologies. What that chart and the book is trying to do is to lay out a theory of solidarity and human rights that can give us the parameters within which solidarity is possible. The book tries to give you all you need to take a purported case of market regulation with a social safety net or global communitarianism and evaluate whether or not the reality and rhetoric lives up to the requirements of the virtue of solidarity.