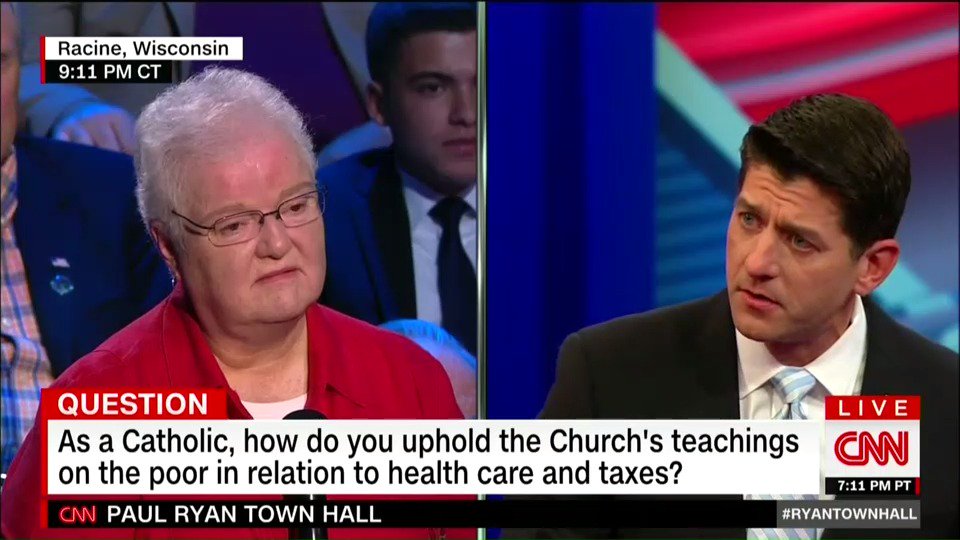 Sister Erica Jordan generated headlines when she challenged Paul Ryan to explain how he reconciled his approach to tax reform and healthcare with his Catholic faith and the Church’s teachings. At Commonweal, John Gehring interviewed Sister Jordan, and she offered her thoughts on Ryan’s response:

It’s unconscionable that our elected officials feel free to do what they’re doing right now taking away health care, threatening Social Security and Medicare. It is just wrong. Speaker Ryan is a leader and he seems to be totally complicit in this way of thinking. I want him to really think about my question. I’ve been so distressed by this Congress and going through what we did during the health-care debate. There is such a disregard for the common good and the poor. It makes me angry. I do believe he is a man of faith, but I think he is misguided.

[Mobility, economic growth, equality of opportunity] are all good things but you can’t take supports away from people who are vulnerable, sick, need health care, and can’t pay premiums. I think he is really naive. Trickle-down economics has never worked. The budget is cutting programs in a way that hurts the poor. I wonder how often he talks to poor people. I don’t think he has much opportunity to really talk to people who are struggling. I felt he was pretty condescending. He started his answer by saying “spoken like a great Dominican nun.” It felt like a pat on the head, which is the way sometimes people treat sisters.

She was also interviewed by Dawn Araujo-Hawkins:

He talks about being a Catholic, but it seems to me that he missed the whole part on Catholic social teaching. The way that he operates in Congress and the things that he supports are so against anything that would benefit poor and working-class people.

I thought it was an opportunity to just bring this forward and ask him to think about what he really believes about that question on Catholic social teaching. I thought it would be a good thing for him to have to answer that and for people to hear him answer it….

I totally disagree with many of the things he said about the kind of programming he’s going for. I mean, the federal budget cuts, cuts, cuts things that would aid job training or any kind of food stamp programs. He mentioned single moms being disincentivized to work — that got a boo in the audience. And then the whole thing about health insurance. He didn’t really answer that.